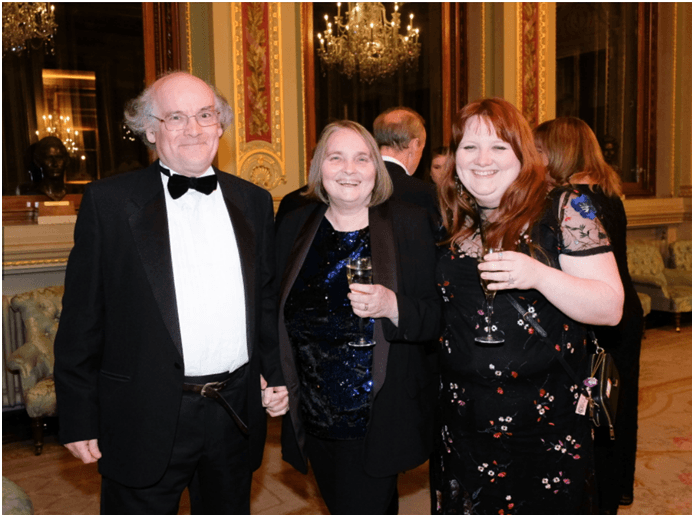 I’m so excited! Davis Methods recognised with BDA Awards. A Davis client again received an award at the BDA Awards Dinner:  ‘Highly Commended’ in the Children’s Award Category for the BDA Annual Awards. Forthermore, a Davis Facilitator, Fionna Pilgrim, has also been awarded highly commended in the Teacher Category.

This is the third year running that Davis has been represented at the BDA Awards Dinner: a most prestigious event. 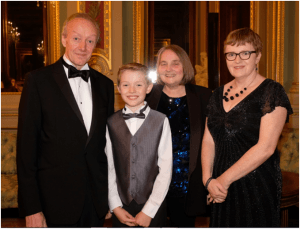 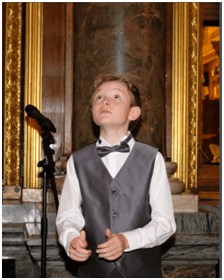 Stanley was the life and soul of the party, seen here tossing a coin for the ‘Heads and Tails’ game

Fionna, Caroline Smith, Karen Hautz  and Ines Grote attended the BDA Dinner at the Drapers Hall in London. The venue was simply beautiful, the food good and the entertainment enjoyable. Emma Hatton sang a couple of her West End Hits. Jonty Hearnden put his well known skills to good use when he auctioned off a number of desirable bids. Lord Addlington made the Awards. A good time was had by all. 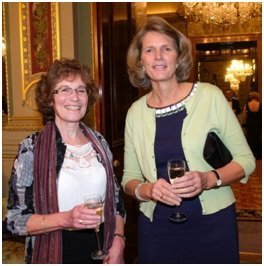 Caroline, Ines and Karen at the reception prior to the Awards Dinner.

However, the highlight for us was the awards presentation as one of Fionna’s pupils was given the children’s award. He gave a brief, albeit brave, speech and mentioned Fionna and the Davis Method loud and clearly. Marvellous!!

Fionna was awarded a ‘Highly commended’ and wrote a very impressive statement in which she explained the success of the Davis method beautifully and in which Richard’s newly published book got a mention, too.

‘I am truly honoured to be highly commended tonight. My approach and that of my Davis colleagues is different. There are visual/spatial learners who crack that audio/sequential code in which most academic learning is delivered; and there are those who don’t. As explained by Richard Whitehead in his book, and online course: Why Tyrannosaurus but not If. These people become non-readers, when presented with a phonic approach. The non-responders mentioned in research. Davis Facilitators have significant success with non-responders. This is why my client, Stanley Brown, highly commended in the children’s category, has had such a positive experience. He has been able to engage with the Davis processes and take control. Moreover, he has worked really hard, showing great courage in confronting those symbol-based issues that have caused him such confusion.

My thanks go to Stanley, for his great effort, to Angela, his mum, for nominating me, to Lindamood Bell and the BDA for choosing me and to Ron Davis, for his perseverance in finding a path to correcting those difficulties that arise out of what is, essentially, a gift’.

DDFA was proud to sponsor the BDA awards dinner in November 2016, held at the prestigious Grays Inn in London. We were especially delighted to find the recipient of the ‘Young Person’s Award’ was the talented Daniel Ellis. Daniel’s Davis facilitator, Jane Heywood, was unable to be with him on the night. However, Davis facilitators Richard and Margarita Whitehead, Nina Pitoska, Tessa Halliwell and Ines Grote were present at the dinner and showed support for both him and the BDA by contributing to the £3500.00 raised during the evening.

In his acceptance speech Daniel spoke of his dyslexia as a gift: “I would not be in the position I am today if I did not have dyslexia. I would not be as creative or free thinking as I am. This gift has enabled me to become an actor and comedian and gain a place at the greatest performing arts Sixth Form in the UK.”

Lord Addington made the evening particularly satisfying for us.   During a conversation with him, we discovered that awareness of the Davis Methods is spreading.

The DDFA was also proud to sponsor the BDA Awards Dinner, held on 27th November 2015. Ines Grote, Caroline Smith, Georgina Dunlop, Llinos Nelson, Sara Kramer and Amanda Bergstrom represented us at the event. Anthea Turner and Kenny Logan presented the awards to the winners. Among those winners, in the Young Person category, was Jack Harley-Walsh. A young man who completed a Davis Programme with Jane Heywood and Georgina Dunlop, in Ascot, and mentioned that fact in his acceptance speech.

The winner in the Teacher category was Jack’s teacher, who said that she learned so much from her students. It should also be noted that another client of Jane and Georgi, the entertainer, Dan Ellis (age 17), did a great stand-up comedy performance. That same Dan Ellis, furthermore, who won the Young Person’s Award in 2016. A Davis dominated evening. We all had a great time as we helped to raise funds for the BDA and, moreover, recognised the success of the award winners. The evening raised some £3700.00.

This video shows Jack receiving his award. He starts to speak at about 2’14” in.

ADHD can be a Gift