Dyscalculia in the Early Years

Dyscalculia: why does it happen and how can it be prevented?

Dyscalculia in the Early Years. “Dyscalculia: a condition that affects the ability to acquire arithmetical skills. Dyscalculic learners may have difficulty understanding simple number concepts, lack an intuitive grasp of numbers,. and have problems learning number facts and procedures. Even if they produce a correct answer or use a correct method, they may do so mechanically and without confidence” (Department for Education and Science, 2001).

Maths is at the heart of who and what we human beings are. Maria Montessori said: Dyscalculia in the Early Years

“That the mathematical mind is active from the first becomes apparent,. not only from the attraction that exactitude exerts on every action the child performs,. but we see it also in the fact that the little child’s need for order. is one of the most powerful incentives to dominate his early life”[1]

So why should it be that, almost as soon as we start our formal education,. so many of us develop difficulties, in some cases almost amounting to phobia, about doing maths that requires numerals? I would like to explain how that happens and some of the simple things we can do to prevent it. Dyscalculia in the Early Years

These symbols represent this quantity in Arabic, Complex Chinese, Simple Chinese, Thai, the numeration system English speakers and most Europeans use,. the English word we use when writing and the English word we say when speaking. Someone arbitrarily chose these representations so long ago that we cannot remember. and they became a convenient shorthand for all those who were let into the secret. Dyscalculia in the Early Years

Dyscalculia in the Early Years

Generally, up until the point of starting school, most children are happily developing mathematical skills and awareness. Most

of them master one-to-one correspondence fairly early as they begin to identify self as a separate individual. and recognise the separateness of those around them. Spatial awareness also begins to develop. A toddler knows where things belong, and is confused if things are not in their proper place,. which she can pinpoint with great accuracy. Before they get to school. most children will be able to draw a picture of a house with windows and doors. in reasonable places and a face with two eyes, one nose and one mouth. They can clearly recognise the quantity of two. Mathematical development is progressing just as it should;. increasing as the child makes more sense of his surroundings and orders her life. Dyscalculia in the Early Years

Alongside this a growing awareness of numerals develops.

Numerals are all around us.  Unlike letters, there are only ten individual symbols that we use to represent number, so they crop up frequently.  However, numerals are only the symbols that represent quantity, as demonstrated above. The child will happily, and often very proudly, recite numerals as far as they can go. This is not counting. Pre-school children are in an absorbent phase for language. Words hold a fascination; they recite nursery rhymes, repeat dialogue from dvds and chant the alphabet and numerals. The last two, usually, with much encouragement from adults around them. This does no harm at all to the child’s mathematical development,. unless adults confuse chanting numerals in order with counting aloud. and assume that the child is at a different developmental stage from where he really is. The quantity is concrete, the numeral and its sound abstract.

Children become ready for abstraction at different rates. Before introducing a child to any arithmetic it is essential to be sure they recognise the links between the numerals,. the quantity they represent and the sound we make when we speak about them. Thus, for example: Dyscalculia in the Early Years 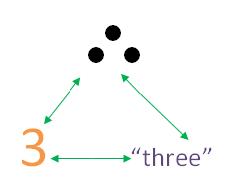 It is also essential to be sure that: Dyscalculia in the Early Years

This is part of the fundamental basis for doing arithmetic.

Furthermore there are key concepts, the understanding of which is essential if the mechanics of arithmetic are to make sense. These key concepts underpin mathematical understanding and we can see them at work even in something as simple as counting: Dyscalculia in the Early Years

In the words of Ronald D Davis:

“Whenever we are doing math, whether it is simple arithmetic or astrophysics calculus, all we are doing is order vs disorder, sequence and time. This is what math is composed of. If you don’t have these inherent concepts you cannot understand math.”[2]

Some children take longer than others to come to an understanding of these concepts. If they are taught arithmetic before they have grasped them, this lack of understanding can interfere with their ability to do even that arithmetic which we regard as simple. Failure affects self esteem and can lead to phobia.

As we have seen, children are born to establish order within their environment; but what can we as parents do to support them?

Given freedom and opportunity children’s mathematical ability develops with no need for assistance. Our primary role is to observe the child’s interests, follow where they lead and provide that opportunity.

How can we do this?

Games that can be played.

Two packs of playing cards, starting with only the picture cards, can be good for pairing and there is any number of matching card games produced for children. But before laying them all out upside down and turning two over, try taking a small number of cards, perhaps 3 to start with, and lay them out face up. Take the 3 matching cards and show the child how to hold the cards one at a time and compare them with those laid out until a match is found for each.

All these activities engender understanding of the key concepts which will gradually be unconsciously absorbed.

The parallel task we, as parents, have is to help our children towards abstraction. The way we do this is by stimulating their imagination, but based in reality.

Here are some examples:

All of these games can help your child develop the skills to engage in abstract thought. Furthermore, it seems to me, that these two lists and more is probably what most parents are doing.

These games and activities can happily continue as long as your child wants to play them, even after they go to school and, let’s face it; this is where the problems start. There is evidence from the research of Alan Thomas and Harriet Pattison for their book, ‘How Children Learn at Home’, that home-educated children who do no formal learning, go on to achieve most satisfactory results in GCSEs and higher education in maths. This probably just goes to show that the best way to prevent dyscalculia is to keep the child away from formal tuition until they are truly ready. However, particularly once the child is in school and if formal numeracy instruction has been started there are things you can do to support them:

Many children starting school are not ready for learning to do arithmetic with a pencil; this fact is at the root of the problems that then develop and get labelled as dyscalculia. Put simply, this is why it happens and it can be prevented by patience and careful observation. Simple measures, such as those mentioned, could be put in place, even in school during Key Stage 1, to allow development of math’s skills through play, exploration and the use of the imagination. When the child is ready for arithmetic she will let you know, and then he will not develop dyscalculia.